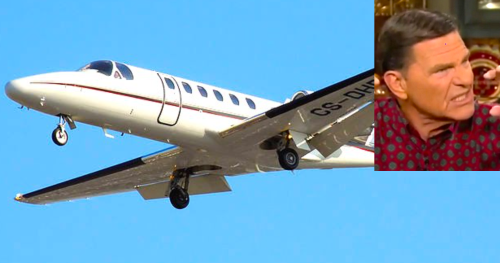 A Cessna 550b, one of Copeland’s jets according to the Christian Post.

So it’s no secret that several American prosperity preachers are ridiculously rich. When I’m out speaking about the importance of combining signs and wonders with simplicity and community of goods, my favourite bad example is charismatic Word of Faith leader Kenneth Copeland, who owns a mansion worth six million dollars, two private jets and his own airport, the Kenneth Copeland Airport, where he keeps his jets close to his million-dollar mansion. Most of his money is from ordinary people, who donate thinking that they’re doing something good for God’s Kingdom and that God will bless them with riches as well.

In a recent video, Copeland and Jesse Duplantis give some horrible reasons for why they “need” their luxurious jet planes: they need to stand up and pray, avoid people who want them to pray for them and who are filled with demons, sleep on the plane and travel long distances across America basically every single day. Now, you can stand up and pray on a commercial airline, or sit doing it; ministering to people is obviously a good thing and if you tired just tell them; and rather than spending millions of dollars on these pieces of luxury, I think it would be healthy for these men to travel less and sleep in normal beds more often.

Not only are private jets incredibly expensive when you buy them, but as J. Lee Grady has pointed out, maintenance costs about four million dollars per year, and a flight costs about 100 times more compared to using a normal plane. Flying is very harmful to the environment, and that harm increases enormously when using a private jet instead of a plane that many people fit into; just like buses are better for God’s creation than cars.

In fact, Jesus transformed the whole world by ministering locally in Israel, walking on foot and sometimes taking a boat (even though He preferred walking even on water). There were horses in His time, but Jesus and the apostles didn’t need speed, just the Holy Spirit (in Sweden, we say that we use “apostle horses” when we refer to walking).

As followers of Jesus, we should live simple and only use planes exceptionally. And when doing so, of course we should minister to fellow human beings and cast out demons. I love John Wimber’s testimony of how he led a guy to Christ on a plane from Chicago to New York by speaking prophetically into his life. He had not jet and he did more good for the Kingdom than these prosperity heretics will ever do unless they repent from their mammonism and pride.

By Micael Grenholm in Justice & Economics on January 5, 2016.
← Jesus is Stronger than the Bombs of Terrorists A Dream Coming True →