Home » God vs Wealth » What Did Jesus Mean With “Sell Everything You Have”?

What Did Jesus Mean With “Sell Everything You Have”?

Extreme Commands for an Extreme World 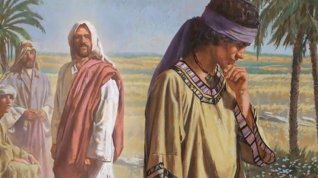 Jesus and the Rich Man

When I was 16 years old, I read in the newspaper about world poverty. For the first time, I learned that one billion people suffers from what the UN calls extreme poverty – less than 1,25 US dollars per day – and that due to the horrible circumstances that such low income brings, 50 000 people die from extreme poverty every day. That’s 18 million in a year. Chocked by these facts, I opened my Bible later that day and found the story about Jesus and the rich man:

Jesus looked at him and loved him. “One thing you lack,” he said. “Go, sell everything you have and give to the poor, and you will have treasure in heaven. Then come, follow me.”

At this the man’s face fell. He went away sad, because he had great wealth.

Jesus looked around and said to his disciples, “How hard it is for the rich to enter the kingdom of God!” (Mark 10:21-23)

This wasn’t the first time I encountered this passage, but when I had done so previously I had simply interpreted Jesus in a non-literal sense. I thought that when He said “Sell everything you have” to the rich man, He meant “Put me as number one in your heart, give all of yourself to me.” Not that He literally wanted the dude to sell everything he had because, come on, that’s extremely… extreme.

However, now that I knew about the extreme suffering that people suffering from extreme poverty are going through, Jesus’ words suddenly seemed reasonable. If my money can save poor people’s lives, it’s quite unethical – even sinful – to spend them on Playstations or fancy cars instead of on them. And Jesus explicitly says that the rich man should sell his stuff in order to give to the poor in every Gospel this story is written in (Matthew 19:16-30, Mark 10:17-30 and Luke 18:18-30).

This interpretation assumes what I call attitude theology – the idea that wealth isn’t necessarily wrong, it’s your attitude towards wealth that makes it immoral or not. If you love God more than your money, you’re allright even if you’re very rich. It’s no problem if you own a lot of money, the problem is if you’re money owns you.

As I’ve explained in my fifth God vs Wealth video that you can watch above, attitude theology assumes that you can have a treasure on earth and your heart in Heaven which, of course, is the opposite of what Jesus was saying in His Sermon on the Mount when He pointed out that your heart will be where your treasure is (Mt 6:19-21). Furthermore, Jesus generalizes the rich man’s regret of following Him in Mark 10:23-25 and parallells, saying that it’s very hard for a rich person to enter the Kingdom of God, and in Luke 12:33 He even gives the same command to sell possessions and give the proceeds to the poor, to all of His disciples!

Sell your possessions and give to the poor. Provide purses for yourselves that will not wear out, a treasure in heaven that will never fail, where no thief comes near and no moth destroys. For where your treasure is, there your heart will be also. (Lk 12:33-34)

People that want to isolate this radical command to one rich dude only, often fail to mention Luke 12:33 where it was given to all of Jesus’ followers. In fact, in Luke 14:33 Jesus says that one cannot follow Him unless one gives up everything one has!

This is where it’s getting uncomfortable, isn’t it? Is Jesus actually saying that all Christians should abandon all their stuff and sit naked in some forest eating berries? After you’ve sold everything, all you have is nothing, right? What most people don’t realize is that Jesus’ command to sell everything isn’t a calling to an abandonment of possessions, but to community of possessions. Mark ends the story about the rich man with:

Then Peter spoke up, “We have left everything to follow you!”

“Truly I tell you,” Jesus replied, “no one who has left home or brothers or sisters or mother or father or children or fields for me and the gospel will fail to receive a hundred times as much in this present age: homes, brothers, sisters, mothers, children and fields—along with persecutions—and in the age to come eternal life. But many who are first will be last, and the last first.” (Mark 10:28-31)

Those who leave everything will gain a lot, not just in Heaven but even here and now. We see this in Acts where every Christian literally sells all they have:

All the believers were together and had everything in common. They sold property and possessions to give to anyone who had need… No one claimed that any of their possessions was their own, but they shared everything they had… there were no needy persons among them. For from time to time those who owned land or houses sold them, brought the money from the sales and put it at the apostles’ feet, and it was distributed to anyone who had need. (Acts 2:44-45; 4:32, 34-35)

Thus, in the apostolic church Christians sold all their stuff, gave the money to the apostles, and the apostles redistributed the money so that everyone’s needs were met. Those who previously lived in palaces got a normal house and those who previously were homeless got a normal house. There was equality and economic community, just as Jesus had been sharing money with HIs disciples (John 13:29).

That’s what will end poverty and that’s how Jesus wants us to live. Those who want to bail out, and claim it’s not for them, are those too egoistic to share their wealth. Poor people gain on community of goods so they surely want it, they just rarely get the chance. It is the rich that have the responsibility to start selling and giving. Are you willing to do that?

For more teaching on wealth and poverty according to the Bible, check out the God vs Wealth series

By Micael Grenholm in God vs Wealth, Justice & Economics on May 2, 2015.
← 3 Things to Keep in Mind When Reading the Bible The Fine Tuning of the Universe and the Existence of God →