A Culture of Hospitality 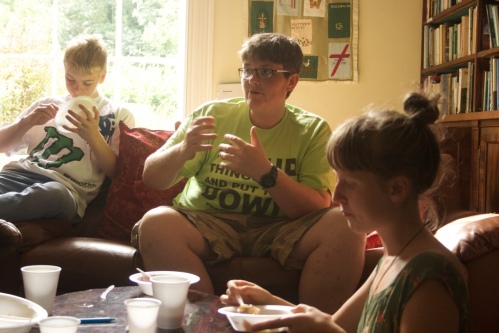 For the last couple of years I have been spending a lot of time helping the homeless. I have taken them into my home, helping them get a job, taking their children to school and arguing for their rights and dignity in the media. I’ve protested when they have been mistreated or deported and I’ve celebrated God’s victory over Satan with them on street parties. Also, I’ve been frustrated with them over the fact that most churches and Christian homes won’t take them in.

There are four million homeless in Europe and eleven million empty houses. Not only that, their are at least 14 million evangelical Christians who could easily fit the homeless into their living rooms and guest rooms. The Bible emphasises that hospitality is something all Christians should engage in:

“Contribute to the needs of the saints and seek to show hospitality.” (Romans 12:13).

“Do not neglect to show hospitality to strangers, for thereby some have entertained angels unawares.” (Hebrews 13:2).

The lack of hospitality is one of Western Christianity’s major sins. All different individual excuses for not letting needy people in, while often seeming reasonable in and of themselves, form a disturbing pattern of distrust and cosiness. It’s futile to claim that someone else can do it when hardly anyone else is doing it. If we want revival and a restoration of Biblical Christianity we have no reason to disobey Biblical commands such as these.

Thankfully, the New Creation Christian Community of the Jesus Army has a long history of hospitality. You’ll find spare beds in almost all community houses, and it has been ridiculously easy for me to bring friends from Sweden to visit. Over the years many homeless have found a home and a fellowship at the NCCC.

There has also been lack of wisdom sometimes, and nowadays we make sure that we know who the people we are letting in are. Community should be a safe environment and our safeguarding policies make sure that we can trust those who stay with us. But this definitely doesn’t mean that we get rid of hospitality. God is an inviting God, his house has many rooms (John 14:2). Let us imitate him and defeat homelessness by giving the homeless homes.

By Micael Grenholm in Justice & Economics on April 2, 2017.
← Christian Climate Change Deniers Don’t Make Any Sense Bring Forth the Apostles and Prophets! →