A Witch Set Free by Jesus 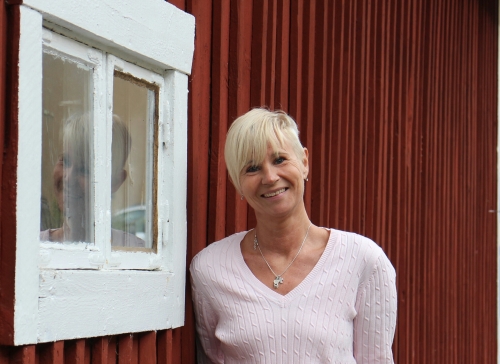 Swedish speaker and author Désirée Kjellin used to be a witch involved with occultism, but a powerful encounter with Jesus transformed her completely.

“IT’S great that yoga suits you”, the psychologist told Désirée. “I think meditation would be the perfect next step.”

He recommended these practices with good intentions, wanting to promote Désirée’s mental health, but little did he know that he indirectly put her on a very dangerous path.

Désirée’s yoga teacher was a passionate believer in new age, and before long she taught Désirée not just the practices of eastern meditation, but also shamanism, Reiki healing and Kundalini.

Désirée joined her at secret pagan meetings in Swedish forests where people worshipped the moon, as well as interacting with “spiritual guides” who for Désirée were a deceased Native American chief and a Samurai. During deep meditation, they became so real to her that she could physically touch them and speak to them.

One evening at the Wellness Centre where they based their new age practices, Désirée concentrated in deep Kundalini meditation to encounter the chakra “snake” which the Sanskrit word of kundalin refers to. According to Hindu philosophy, if we awaken the Kundalini snake resting in the bottom chakra we might become gods ourselves.

As Désirée concentrated, she suddenly heard a loud bang and saw a cobra in front of her, bathing in bright light. It had a white, human face with red eyes without any hair, and as it came closer she sensed a stinking breath. She was happy and terrified at the same time. It said “Now, you are mine”, and she felt a tremendous warmth and power going through her body.

Waking up from this experience, Désirée heard her mentor say:

“Welcome back from your first Kundalini rising. You are united with the Universe now. You have powers like nobody else. Nothing will be the same!”

Désirée found herself being able to move objects with her mind. She started to collect crystals and stones connected with spiritual powers. She had an altar in her house where she worshipped the spirits and thanked them for giving her this power.

Soon enough, she was known as “the witch” in her village, making no distinction between white and black magic. She even contacted demons just “for fun”, to have somebody to talk to when she was bored.

Eventually, Désirée’s health started to deteriorate dramatically. Her skin colour faded, she was always tired and had hardly any strength, and she lost a lot of weight. Her doctor could see that she was sick, but all the tests showed nothing wrong. Reiki healing and herbs didn’t help either.

Désirée could only work part-time, most of the time she was resting in her bed. One afternoon as she was lying there, thinking about a seance she would have the same evening, a bright light filled the room and a man came in and sat down on her bed.

He was really there – she felt the bed spring up as he sat down – and he stroked her cheek with his hand, saying:

“I know everything about you, and I love you.”

Désirée initially was convinced that it had been her deceased father, contacting her from “the other side”. She then thought about the upcoming seance, and felt very uncomfortable leading that. She called her mentor and said that she couldn’t come. She asked herself where she would be able to find the peace and rest she desperately needed, and then suddenly realised: what about church?

When Désirée (the “village witch) entered the local village church the upcoming Sunday she caught a lot of attention from the other visitors.

But the priest lovingly welcomed her, and she continued to join the Sunday services week after week. When she received the bread and wine for the first time, she was filled with joy and happiness.

Letting go of the darkness was not easy; the demons fought back and caused her much agony. But eventually she was able to let it all go and give her heart completely to Jesus.

She is today involved in the house church movement and has been a travelling speaker for several years, talking about the dangers of new age. In her autobiography Flickan som slutade ljuga (“The Girl who Stopped Lying”), she writes:

“In my quest for healing and a complete life, I have tried to find in all sorts of places the peace and liberty I now enjoy. Nothing has helped except meeting Jesus on my bedside, over ten years ago.

I know what I’m talking about. I have experienced both darkness and light, I lived in the darkness and I thought it was the light until the truth was revealed to me.

By Micael Grenholm in Salvation & Eternal Life, Signs & Wonders on March 3, 2017.
← A Book Packed with Community Inspiration A Church Without Evangelism isn’t a Church →