Miracles in the Early Days of the Jesus Army 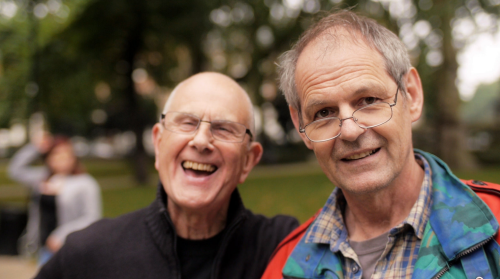 Ralph, to the right, ex-atheist convicted by the Holy Spirit

The Jesus Fellowship Church, a.k.a. Jesus Army, was born out of a mighty work of the Holy Spirit through a small Baptist chapel in Bugbrooke, central England, during the late 60’s and early 70’s. The Holy Spirit loves to do miracles, and so the book Fire in Our Hearts by Simon Cooper and Mike Farrant that describes the history of the Jesus Fellowship records multiple miracles.

During a charismatic meeting on a Saturday evening in the chapel, one boy suddenly took his glasses off and exclaimed that he could see perfectly all of a sudden. A lady was healed of a deformed hand and a man’s gums were healed. A man called Mick had been mainlining a lot and had several ulcerations and scars all across his arms. When he emerged from the water during his baptism, all the marks were gone!

A woman called Carol once stood up at a meeting and declared prophetically “Mim is going to get baptised in the Spirit – tonight!” She was referring to her friend and the very same evening Mim was indeed spiritually baptised and started to speak in tongues. Carol’s dormitory was invaded by beetles, so she said “I rebuke you beetles in the name of Jesus!” – and they vanished.

In 1971, one of the older ladies of the chapel saw a vision of Jesus whose face was shining and who filled her with peace and the need to worship. An atheist communist, Ralph (whom I myself have met and know) went to the Fellowship to point out how stupid all these Jesus hippies were, but all of a sudden a lady arose and said:

“The Lord tells me that there is a young man here who is very cynical. He wants you to know that He really loves you and wants to set you free.”

Ralph felt totally exposed, hardly spoke during two days, and eventually gave his life to the Lord and became a church leader.

Finally, a guy called Victor once prayed: “Lord, if you want me to marry Sheila, then make this wart on my finger go down.” When he opened his eyes the wart had vanished.

As many of you know, Jesus Army also practices community of goods. This started in 1975 and was just like the miracles a natural consequence of the outpouring of the Holy Spirit and a longing to be like the church of the New Testament. Cooper and Farrant point out that there were two streams in the charismatic movement of the 1960’s, one that sought renewal in existing church traditions, and another that wanted restoration of the Biblical church. Thankfully, the Jesus Army went for the latter.

Fire in Our Hearts can be read freely online here.

By Micael Grenholm in Signs & Wonders on February 10, 2016.
← Holy Hangout: Prosperity Theology Podcast: Why Eschatology and Eternity Are Important →