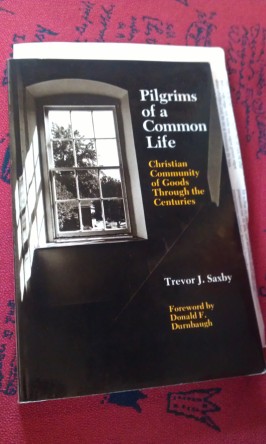 For a long time, I didn’t want to read non-biblical Christian books. I thought that most of the time they were actually diluting the radical teachings of Jesus (and quite frankly I still think this is the case). But I discovered that there are two areas where I get very equipped by Christian litterature, namely church history and testimonies. This has helped me a lot both when I pursue signs and wonders, evangelize and work for peace and justice. I want to share with you some books that really has inspired me a lot and that I highly recommend. First out is Pilgrims of a Common Life: Christian Community of Goods Through the Centuries by Trevor J. Saxby.

In the first three chapters, Saxby effectively challenges the popular misconception that the apostolic church of Jerusalem was the only one practicing community of goods and that it was an exception rather than an example. He shows that community of goods is the logical consequence to the economic teachings of Jesus, he points at the fact that Jesus Himself practiced community of goods with His disciples, and he also looks at the cultural and historical context and shows how community of goods was not a foreign idea in first century Israel – the essenes practiced it and it was supported by both Greek and Jewish morals.

Saxby then moves on to the church fathers, and as I also have shown on this blog, many of them supported community of goods and argued that it was something Christians should practice. However, when the Constantinian imperial church emerged in the fourth century, the radicality of the original church moved out to the deserts and monasteries. Saxby naturally gives a lot of attention to the monastic movement throughout the book, sketching its different branches, developments and practices.

Unfortunately, both Lutheranism and Calvinism rejected monasticism and embraced the Constantinian state-church system instead. The more biblical, radical reformers, the Anabaptist, did the other way around – the Anabaptist hutterites practices community of goods to this very day. And eventually they were joined by other protestants. The last three chapters in Saxby’s book are really interesting since they cover different Christian communities that most people haven’t heard of: the Labadists in Holland, the Harmony and Zora Societies in the United States and the Aiyetoro community in Nigeria.

Saxby’s book is well researched and well written in a non-academic, easy-to-read language. It is a pioneering work, and even since it wad written in 1987 not many other books have looked at the history of Christian community of goods, which makes it still relevant today. It’s a bit brief, some community movements I know of are missing and when I finished the book I was eager to know more and dig deeper! But this is of course a very good sign of Pilgrims of a Common Life being an excellent introduction and an inspiring work. You can order the book at the Jesus People shop from the Jesus Army. Also check out Saxby’s church historical blog Making History Now!

By Micael Grenholm in Justice & Economics on June 28, 2014.
← Why Do I Call Myself a Jesus “Hippie”? Glory Report from Iris Global in Mozambique →