Home » Justice & Economics » How many Congolese children has your phone killed today?

How many Congolese children has your phone killed today? 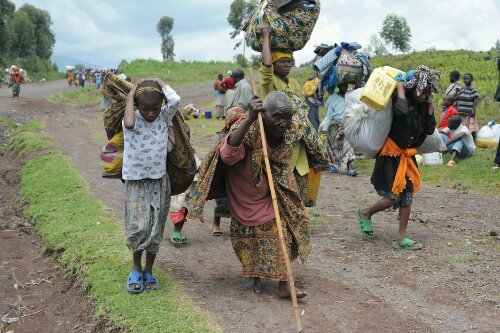 My heart is bleeding for the Congolese people. For the last fifteen years, they have suffered from the deadliest conflict since World War Two. Over six million people have died, and every day 1500 more join them because of the malnutrition and epidemics that follows the war. Half of them are children below the age of five. Tens of thousands of women have been raped by soldiers, since sexual violence is used as a weapon. And right now, the conflict is escalating because of the formation of a new rebel group, called M23. Its leader, Bosco Ntaganda, is wanted by the International Criminal Court for war crimes and crimes against humanity, and his nickname is “the Terminator”.

Three things especially disturb me concerning this gigantic humanitarian crisis. Firstly, people talk and act like the genocide in Rwanda is over, when in fact it just jumped across the border to Congo. Some of the Hutu genocidaires formed a militia named FDLR that is still active in the Congo. The M23 are Tutsis, so these groups want to kill each other, while they fight the government of Rwanda and the government of Congo respectively. The international community was criticized for lack of action in 1994, still they allow six million more to die.

Secondly, 90% of these people are Christians. Not only the victims, but also the soldiers who kill and rape and steal. How could the church fail to the point that its members started to commit these awful atrocities against each other? What happened to peace? What happened to love?

Finally, this conflict is financed by the phone I am writing this text on. The same is true for many computers, cameras and other electronic devices. You see, the conflict is concentrated to the eastern provinces of North and South Kivu. These are extremely rich of minerals, many which are used in electronics. Rebel groups like FDLR and M23 take control over the mines and tax the workers to buy food and guns for their soldiers. This has been known for years, still the conflict mineral trade has continued to flourish.

But more and more action is taken to stop this. The US has recently established a law that forces companies to show where their minerals come from. Several electronics companies have already said that they want to avoid buying these minerals. However, there’s still a long way to go. Other countries than the US have not adapted similar laws, and many companies do far too little to guarantee that their products are conflict-free.

So do me a favour and go here to send an e-mail to electronics companies, demanding conflict free products (if you live outside the US like I do, type “other” where it says “state”). If you’re interested, here you can check how good or bad different electronics companies perform concerning conflict minerals. And if you want to see a really good documentary about the Congo crisis, watch the one below. Keep the Congolese people in your prayers, and give much money to organisations working for peace and justice in the area. This massacre has to end.