Home » Charismactivism » A Yankee Imperialist Pig Filled with the Spirit

A Yankee Imperialist Pig Filled with the Spirit 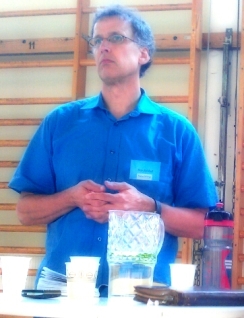 Bob Ekblad has for 30 years been a Christian activist, eagerly working for peace and justice – especially among poor immigrants, prisoners and Guatemalan and Honduran farmers. In the clip above, he shares that eight years ago, he realized that something was missing in his ministry for the poor and oppressed. Somehow nationalism and egoism seemed to be stronger than the Gospel he preached.

At this time, Bob’s younger brother got saved in the Charismatic movement, and simply told him: “You do miss something, you miss the power of the Holy Spirit!” Bob was very sceptical since republican agendas dominated among Charismatics, but eventually he went to the Catch the Fire Toronto Church to be filled with the Spirit.

And filled he was! A prophetic man said to him that he saw a vision of him sitting with men in red uniforms on blue plastic chairs. He said “I believe it’s in a prison, and that the Father says ‘I love how you love my prisoners’.” Bob was stunned. That was exactly how his prison ministry looked like! Then the man prayed for a healing anointing to be released in Bob’s life.

Bob initial thought was “No!!” He didn’t want any power. He was already embarrassed by his position as a tall, white, American male. He saw himself as a yankee imperialist pig. He didn’t want to get even more privilegied.

After a while, he learned to welcome the gifts in his life. After all, the gifts are meant to serve people and give honour to the power of Jesus, not our own. So nowadays, Bob is a Charismatic Christian activist, combining signs and wonders with peace and justice. Love him!