Why Liberal Theology Paves the Road for Nazism 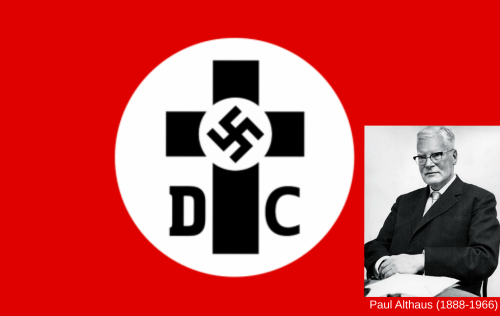 I’m a master of blog titles, am I not?

This week my first book in Swedish was released. It’s called Jesus was Also a Refugee and is co-authored with evangelical pastor Stefan Swärd. It develops a Christian perspective on the refugee crisis and the European xenophobic movement. Our conclusion is obviously that Christians should bless and welcome immigrants and refugees and not oppose migration from poor, dangerous countries to rich and safe countries.

One surprising finding is that many xenophobic and racist Christians have a liberal, or progressive, view on theology. This is very evident if you look at Nazi Germany in the 1930’s: liberal theologians like Paul Althaus and Emanuel Hirsch celebrated Hitler and hated Jews. They combined their Nazi rants with biblical criticism and despising any effort to follow the commands of Jesus as they are expressed in the New Testament.

Liberal Christians are also very prominent in the main xenophobic party of my nation, the Sweden Democrats. This party has neo-Nazi roots and try to appeal to Christian values in contrast to Muslim or socialist values. They have been working hard to gain influence in the Church of Sweden, by electing people who hold on to nationalism while also being very liberal theologically.

Jonas Åkerlund, former vice party leader and top candidate for the church election, has explained to the press that he doesn’t believe that the Bible is accurate or that miracles exist. Björn Söder, another top politician within SD, has said that Christianity mixed with Nordic paganism should be the state religion.

Many seem to think that progressive theology and progressive policy go together, that liberal theologians lean to the left and evangelical theologians lead to the right. But that doesn’t have to be the case. What liberal theology essentially does is to rip Christianity’s roots apart, using often very bad arguments for why Christians today shouldn’t follow the example of Jesus and the apostles. They emphasize “modern” values and give that priority over biblical values.

But modern values shift. Althaus and Hirsch were arguing for the modern values of their day: anti-semitism, dictatorship and genocide. If you’ve already thrown out the Bible, what’s stopping you? Moral relativism and an emphasis on “modernity” always paves the road for nazism and other horrible ideologies.

Update: Here’s a video where I expand on this reasoning and answer some objections I’ve received in various forums: