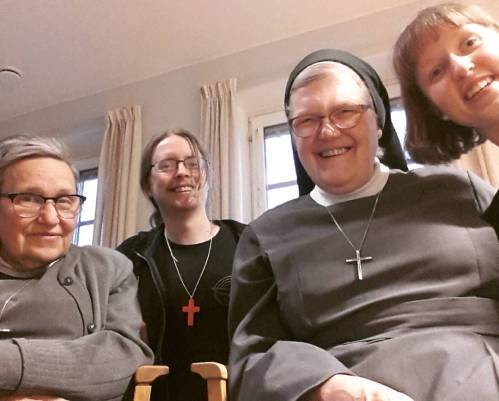 Me and Sarah Stenmark from the Jerusalem Project with two nuns, who shared with us what community can look like

I’m so excited! Today I’ve had a Skype meeting with some brothers and sisters in the Jerusalem Project, an association I co-founded a few months ago that encourages Christian community of goods in Sweden. We talked about the vision for community that God has put in our hearts, and we listed some basic principles that we want to be foundational for the community that we plan to start, a community where everyone have everything in common.

As some inspiration for such a rule, I have looked at both ancient and modern examples of monastic rules. I will give you two examples here before I showcase what principles we have talked about in the Jerusalem Project.

First out is St. Basil’s rule, written in the fourth century. These are just the chapter titles, the actual rule is like a small book:

There are some problems with this rule that makes it unsuitable for the community we want to build. Firstly, it’s just directed to celibates – male celibates even. Secondly, it’s hierarchical in a sense that is not as apparent in the New Testament. On the other hand, I am attracted by its radicality when it comes to simplicity and spiritual discipline.

My other example isn’t exactly a rule, rather an inspiration to rules in modern communities. I’m talking about the twelve marks of a new monasticism. Developed by a network of modern, American communities, it does not claim to deal with everything that a local community should think about but rather describe common values and principles among those who share common lives:

I agree with all of this, but feel like some stuff needs to be added to our community rule. The twelve marks are not sufficient for a standard community rule.

So lo and behold, here comes the first draft of a List of Principles for the pioneer community of the Swedish Jerusalem Project:

Are there things we missed? How do you think a good community rule should look like? Let me know in the comment section!

By Micael Grenholm in Justice & Economics on March 17, 2016.
← Come and See: How Community of Goods Can Become Normal Again 7 Reasons You Shouldn’t Wear Expensive Clothes →