Separated by War, United by God 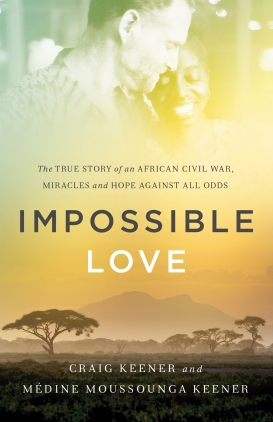 Today I write on Pentecostals & Charismatics for Peace & Justice about Craig and Médine Keener’s upcoming book Impossible Love. After becoming very good friends, the civil war in the Republic of Congo made it impossible for them to contact each other for eighteen months. Craig didn’t know if Médine was dead or alive. Here’s an excerpt from the article:

Craig Keener writes in an email correspondence to PCPJ:

“There was no friend I had corresponded with as much over the years as Médine. I was always happy to receive her letters, but the last one threw me into panic: She announced that she didn’t know if she was going to live or die, because troops were closing in on her city.”

The horrors Médine and her family was going through were unimaginable.

“Her cousin was shot dead on Christmas Eve; her father and brother had barely escaped being shot. Although she didn’t mention it, she and her mother and sisters didn’t know how they could flee because her father was disabled and they had no way to carry him. But by the time Médine’s letter reached me, her city lay in shambles.”

In the midst of this darkness, God manifested his presence in miraculous ways according to the Keeners. In their forthcoming book Impossible Love (Chosen Books, April 2016) they give several examples of this.

“One of the early miracle stories in the book, though mentioned in passing for the sake of space, is one that we have often shared in other connections. That was when a prophetically-gifted friend of the family prayed over Médine’s sister, who, so far as anyone could tell, hadn’t breathed for about three hours (and thus was, again so far as anyone could tell, quite thoroughly dead). The sister immediately began breathing again, and was fine by the next day,” Craig Keener writes.

Read the rest of the article on pcpj.org. And make sure to pre-order the book, it releases in April.

By Micael Grenholm in Charismactivism, Peace & Politics, Signs & Wonders on March 9, 2016.
← Why Most Preachers Never Preach the Gospel Song: Welcome →