How to Make a Mainline Church Evangelize on the Streets 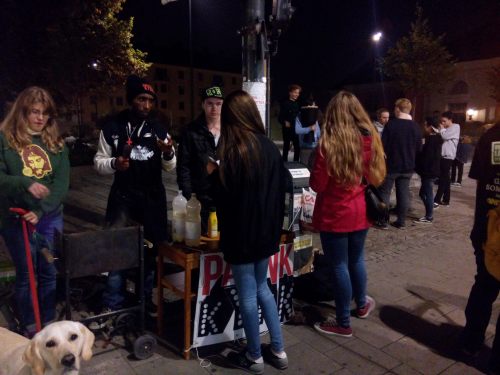 Me and some friends were out on the streets evangelizing yesterday, by handing out free pancakes and sharing the Gospel

I’m not a reformer, Im a restorer. While several intentions of the reformation were good, the emphasis on reform in itself doesn’t express what we really want the church to look like, and so I know several Lutherans who defend unbiblical teachings and changes with the claim that the church should be constantly reforming itself, which isn’t a very Biblical idea. Restorationist Christians on the other hand, like Anabaptists or Pentecostals, have emphasized that we should restore the Biblical church and thus has a clearly expressed goal with the reforms. Just by looking at the Holy Scriptures, we see how Jesus did church, how the apostles did church and how they thought that we should do church. And they didn’t call it “church”, since that’s obviously an extremely boring word, they called it the Way (Acts 9:2); the Lifestyle, basically.

The charismatic movement, which I am a part of, have used restorationism to resurrect a hunger for the baptism of the Holy Spirit and miraculous gifts. But there are some things that I think still needs to be restored in most charismatic churches: mandatory evangelism, organic simplicity and community of goods. I will explain more about what these three things mean and how they should be practically restored in mainline churches in three blog entries, this being the first.

So what do I mean with “mandatory evangelism”? Well, the apostolic church which was funded and lead by guys who knew Jesus personally had two sorts of meetings, or “services” if you like: “Every day they continued to meet together in the temple courts. They broke bread in their homes and ate together with glad and sincere hearts” (Acts 2:46). They both met in the homes and in the temple courts. The latter was the place where Jesus had His theological debates – it was a place where all the religiously interested came to worship God and discuss with each other. And the early Christians both join the Jews for prayer in the temple (Acts 3:1), and to heal them (3:6-10) and preach the Gospel to them (5:21).

As we saw in Acts 2:46, every Christian were a part of the temple outreach team, and they did this every day. The home meetings, where they broke bread and prayed, are probably what developed into our modern-day Sunday services: they happen once a week and are quite internal. But the Biblical church also made sure to preach the Gospel every day – and as a result people were saved every day (Acts 2:47). You don’t need to be a rocket scientist to understand that if you take 3000 disciples to the main gathering point of the town every day to preach the Gospel and heal the sick, people will get saved.

Sadly, most churches don’t look like this: if they even evangelise it’s usually a small minority of the church, and it’s not viewed as mandatory as Sunday services are. Many churches defend their lack of evangelism with saying that they encourage their members to share the Gospel privately – but of course they never get any training to do so since the church doesn’t evangelize together. It’s easy for evangelists to get frustrated with the established church and create evangelistic teams that are independent of the local churches. But remember what Paul said about the ministry of the evangelist:

So Christ himself gave the apostles, the prophets, the evangelists, the pastors and teachers, to equip his people for works of service, so that the body of Christ may be built up until we all reach unity in the faith and in the knowledge of the Son of God and become mature, attaining to the whole measure of the fullness of Christ. (Ephesians 4:11-13)

An evangelist should not preach the Gospel instead of the saints, but an evangelist should equip the saints so that it becomes Christ-like and thus evangelizes like Christ. Evangelism is not just for evangelists, it’s mandatory for all believers. But how should we make mainline churches understand this so that they organize street evangelism events and public meetings every week? Well, here are a few tips:

By Micael Grenholm in Church & Theology, Evangelism & Missions on September 21, 2014.
← Artificial Nationalism vs the Kingdom of God How to Transform a Mainline Church into an Organic House Church →