Yes, Community of Goods Does Work! 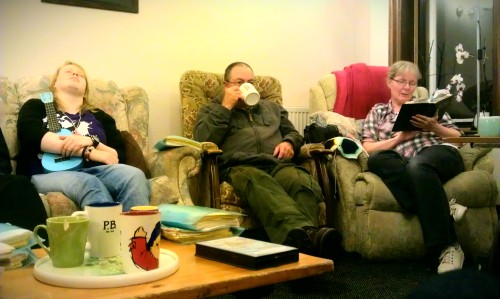 Holy Treasure community house in Kettering. Tim and Jane to the right have lived in Christian community for over 20 years.

When I visited the Jesus Army in the UK and enjoyed their community of goods, I obviously wrote a lot about it on the Internet. Apart from writing on this blog and my Swedish one, I shared a lot of pictures and joyful reflections, just being happy and thankful of experiencing the community of goods I had read about in Acts chapters 2 and 4. It didn’t take long before many of my Christian friends started arguing against community of goods, using all kinds of arguments why we shouldn’t live like the apostles. Many of them were based on myths and false assumptions, and on of the most common is the idea that community of goods simply doesn’t work.

It’s quite strange how I, when I’m in a community house that has existed for 30 years, hanging around with people that have lived in community for most of their lives, get to hear from my friends back home in Sweden that community of goods doesn’t work and is doomed to fail. There are usually three arguments for this:

There are specific problems with each of these arguments: nothing indicates in 2 Cor 8-9 that the need for aid was created by community of goods, and it’s hard to figure out how the apostolic community of goods even would create poverty (it’s very clear in the New Testament that Christians were still expected to work hard even when having everything in common). The poverty that Paul wanted to combat could have been caused by a famine, or a big revival among Jerusalem’s poor, or many other things.

Furthermore, to say that community of goods is bad because communist dictatorships kill people and ruin their countries, is like saying vegetarianism is bad because Hitler was a vegetarian. As my MennoNerd friend Kevin Daugherty has pointed out, the man who coined the term “communism”, Étienne Cabet, was a Christian who wanted to restore the biblical community practice on the local level. He wasn’t imagining a brutal dictatorship. And neither are most Christians who practice community of goods.

Finally, it is true that several Christian communities have ended, but does something really has to exist forever in order for it to be good and divinely inspired? How many of the biblical churches are left today? Of course, we should strive to build something that lasts, but it isn’t useless if it ends as well. That being said, there are thousands of communities that has existed for hundreds or even thousands of years. Most of them are called monastries. The simple existance of this multitude of prayer centres where Christians have practiced community of goods til the day they die, is a big debunking of the “community of goods doesn’t work” myth.

By Micael Grenholm in Justice & Economics on September 3, 2014.
← The Supernaturalist and Naturalist Worldviews TESTIMONIES – live performance at the Uttini Festival →