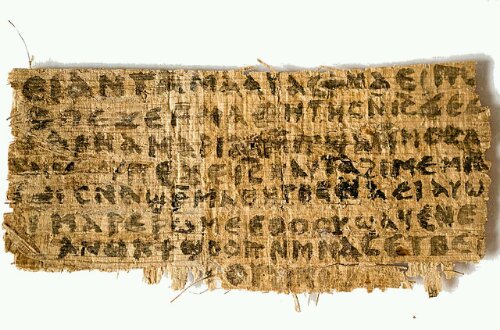 The Gospel of Jesus’ Wife

Two years ago, professor Karen L. King at Harvard Divinity School announced that they had found an ancient papyrus fragment where Jesus is saying that He has a wife. Needless to say, it caused a lot of controversy; apologets, academics, the Vatican and others said that the document was a modern fraud. One of the arguments for this was that the text seems to be based on the Gnostic Gospel of Thomas, and includes a typo made in modern times in a PDF document (!).

However, just a few days ago Harvard announced that the document had been subject to radiocarbon analysis and spectroscopy, and it turned out that both the papyrus and ink indeed were ancient, being produced somewhere between 659-859 AD. Professor King guessed that the original text, from which this papyrus was copied, could have originated in the second to fourth centuries, but this is speculation and not something the radiocarbon analysis show.

Harvard’s press release states that “[t]he fragment does not in any way provide evidence that the historical Jesus was married, as Karen L. King, the Hollis Professor of Divinity at Harvard Divinity School (HDS) has stressed since she announced the existence of the fragment in the fall of 2012.” King has said “don’t say this proves Dan Brown was right.” Rather, she sees this as an interesting contribution to our understanding of how Christians and pseudo-Christians viewed celibacy in the early church.

Unfortunately, some of the media reports I’ve seen doesn’t mention that King and Harvard stresses that the document doesn’t prove that Jesus was married. And as you could expect, several secular conspiratists start to speculate about whether the patriarchal evil church institution tried to destroy this ancient feminist document. But that doesn’t make any sense, for three reasons:

Firstly, a married person isn’t necessarily more feminist. Just look at Mohammad, or George Bush. Jesus did have female disciples and coworkers (Luke 8:1-3), and He treated women with a respect and friendship that surprised the dudes (John 4:27). Sure, many are mad at Him for only electing men as the twelve apostles, but not as many are mad at the fact that all twelve of them also were Jews, and few are even aware of the symbolic and prophetic connection to the twelve sons of Israel, or that a woman, Junia, is called “apostle” in Rom 16:7.

Secondly, since there’s nothing feminist with being married, it doesn’t make any sense that the Gospel writers would erase the existence of Jesus’ wife even if they were patriarchal douchbags. They wrote a lot of controversial things about Jesus: that He intentionally broke the Sabbath, that He had lunch with sinners and prostitutes, that He was crucified and that women were the primary witnesses to His resurrection. Being married on the other hand wouldn’t be very controversial at all.

Thirdly, I don’t get how people can view a fragment from 659-859 AD as more authoritative concerning the life of Jesus compared to the Gospels which basically all Bible scholars agree were written in the first century. I don’t get how people can claim that this fragment show us that Jesus may have had a wife when the professor who discovered the fragment says that it isn’t any proof whatsoever that Jesus was married. But one thing I know: the church is the bride of Christ (Rev 21:9-14), He loves us abundantly, and He wants to meet us not only in ancient texts but here and now today.

By Micael Grenholm in Church & Theology on April 13, 2014.
← The Blind See and the Deaf Hear in Sire, Ethiopia Eight Things You Should Know about the #CARcrisis  →