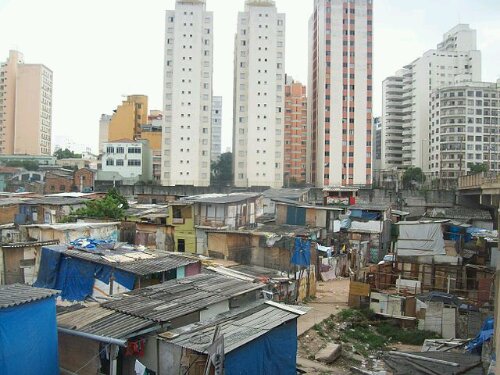 I’ve already described how the Bible tells us to support social and economic equality and bridge the gap between the rich and the poor. Now that I am going to one of the most unequal countries in the world, I feel the need to return to this topic. Let me explain why I’m convinced that inequality is immoral, unjust and unholy.

There are several problems with this argument:

1. Inequality produces social problems. In 2009, Richard Wilkinson and Kate Pickett authored a book called The Spirit Level, which looked upon how inequality impacts social issues in OECD countries. The results were staggering: they found correlation between inequality and infant mortality, crime, poor health, lack of education, etc. Of course the poor suffered most, but even the rich were worse off in unequal societies compared to equal ones. Thus, the thesis that everyone can benefit from inequality is not true when it comes to social aspects and quality of life.

2. Growth in rich societies cannot solve social problems. What’s even more interesting is that Wilkinson and Picket found that the social problems they analyzed weren’t decreasing as a country got richer. Although being poorer than the US, Sweden still had fewer social problems since it is a more equal country. Thus, even if inequality would produce more economic growth than equality (something which can be debated), it still wouldn’t make so much difference when it comes to quality of life. Furthermore, growth is rarely good for the environment.

3. Inequality is unfair. On what basis are some people richer than others? It’s not very often that this depends on how hard you work – those who undoubtedly work hardest globally are poor rural farmers, living on one dollar a day. Rather, you are born into a country, community and class that define how rich you will be able to become. Problem is that you don’t choose where to be born. In equal societies, you get roughly the same opportunities as everyone else no matter what parents you have, but in unequal ones you are often doomed for poverty or wealth from birth. That’s extremely unfair.

4. Inequality is undemocratic. Money is power. The rich often use their money to lobby towards politicians and to affect public opinion. But they haven’t been elected to have that position, nor have they deserved it through working hard (since poor people work harder). When some people have more money than others it becomes a democratic problem – and thus are equal societies more democratic and fair.

5. Rich people waste their money. Thousands of people die each day because of poverty, humanitarian and development organizations are in desperate need for money, still most rich people spend billions on unnecessary stuff like luxury, entertainment and beauty products. Some may say that there is a trickle down effect: the rich pay the Jacuzzi salesman who pays the hamburger guy who pays the poor janitor. However, it is impossible to guarantee the trickle down effect – besides, many of the poor are outside the established economy, and that’s why they’re poor in the first place. If we decrease consumption of unnecessary products and increase aid, there will be more equality and less people will suffer and die.

6. Weren’t all men created equal? We’re all created in the image of God, and most people agree with that we have equal rights and equal value and dignity. How then can we tolerate that people are born into such huge economic difference, which will affect how they utilise their rights and how much suffering they can avoid throughout their whole life? As I said before, the rich haven’t worked harder than others, they were in most cases born into a privileged position, while others are not. Talking about that people have equal rights and value are just empty words if we do not work for social and economic equality.

7. It is unbiblical. As I mentioned in my earlier blog post, the Bible is a strong supporter of equality. 2 Cor 8:13-15 says equality is the purpose of aid giving. Lk 3:11 says that it is the fruit of repentance. Acts 2:44-45 shows it was the order of the early church. If we want to be obedient followers of Jesus, we must work against inequality. Amen.