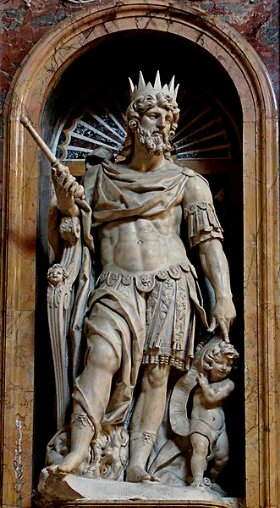 “What about king David?” people ask me when we debate whether a Christian should be rich or not. David was a “man after God’s own heart” (Acts 13:22) who clearly loved and feared the Lord, and yet he was very rich. Same thing is true for many believers in the Old Testament – kings like Solomon or Hezekiah as well as landlords as Abraham and Job. They believed in God, and still were rich.

However, we must remember that just because you are a believer, all your actions do not necessarily reflect the will of God. The only person in the Bible that we know lived a totally holy life is Jesus Christ. But when it comes to Abraham for example, he had married his sister. Should we use that as an argument for us to do the same?

Likewise, when it comes to David and Solomon, they lived in polygamy. We know however that Scripture condemns polygamy in other places. And interestingly enough, the same Bible verse that forbids Old Testament kings to take several wives also tells them not to accumulate wealth. This verse is not so famous, but is is a clear debunking of the “what about king David”argument. In Deutoronomy 17, God speaks of the lifestyle of the future king of Israel. Among other things, He says:

He must not take many wives, or his heart will be led astray. He must not accumulate large amounts of silver and gold. (Deut 17:17)

In other words, when David or Solomon were rich, they were acting against the will of God, just as they were when they lived in polygamy.

Many people may get confused about this since Scripture says that it was actually God who gave wealth to Solomon or Hezekiah. But we must remember that just because you receive a gift from God, your use of it doesn’t automatically become sinless. We have all received our bodies from God, still we can misuse them.

Solomon and Hezekiah both did good and bad things with their God-given wealth. Some of the money they “had” they used to build villages and cities. Does that sound like private property? Of course not. After all, they were kings with responsibility for all the Israeli people. However, other parts of their wealth they used for gold and luxury for themselves. When they did so, they clearly acted contrary to Deut 17:17.

But what about Job? Even though he experienced devestating poverty, he was rich both before and after this suffering. However, we must look at what he did with his money. As I argued in the first part of this blog series, what’s important is not so much how much you earn but rather what you do with your money. And it seems like Job was passionate giving all his stuff away:

If I have denied the desires of the poor or let the eyes of the widow grow weary, if I have kept my bread to myself, not sharing it with the fatherless—but from my youth I reared them as a father would, and from my birth I guided the widow—if I have seen anyone perishing for lack of clothing, or the needy without garments, and their hearts did not bless me for warming them with the fleece from my sheep, if I have raised my hand against the fatherless, knowing that I had influence in court, then let my arm fall from the shoulder, let it be broken off at the joint. For I dreaded destruction from God, and for fear of his splendor I could not do such things. (Job 31:16-23)

To conclude, I would say that when people use their money to help the poor and needy with their money, they are following the will of God and do not sin. But if they spend their money on themselves they are acting contrary to the will of God and are sinning. As Deut 15:9 puts it: “Be careful not to… show ill will toward the needy among your fellow Israelites and give them nothing. They may then appeal to the LORD against you, and you will be found guilty of sin.”

By Micael Grenholm in God vs Wealth, Justice & Economics on March 1, 2013.
← How to Spread the Gospel PCPJ – Pentecostals and Charismatics for Peace and Justice →