Home » Church & Theology » The Problems with a European Pope

The Problems with a European Pope 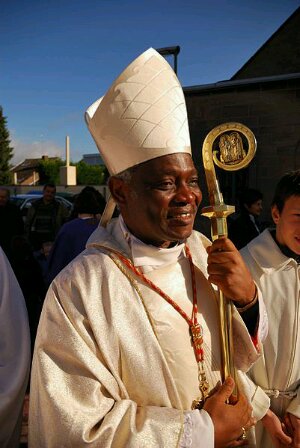 Peter Turkson, possibly the next pope

Yesterday, world news was dominated by the announced retirement of Pope Benedict XVI. After having been amazed by the fact that he is the first pope to resign in almost 600 years, the global media started to speculate about who would become the next bishop of Rome. Many think or hope that he will come from Latin America or Africa.

Since I’m not a Catholic, and especially not a cardinal, it could be argued that I shouldn’t express views on pope elections. But as a Christian with love for all of Christ’s church, across denominations as well as nations, I still want to question the European dominion over the Holy See.

I respect Catholic’s conviction that all popes are elected through the prophetic guidance of the Holy Spirit; still all prophecy should be tested (1 Th 5:19-20). Was it really the will of God that during the last 500 years when Catholicism has expanded across the globe, especially in Latin America, all popes have been European? In fact, before John Paul II, every single one was Italian. Apart from a few North Africans and Syrians, and S:t Peter himself of course, all popes have been white Europeans during all of church history.

However, Europeans are a minority in the Catholic Church today. More Catholics live in Latin America than in Europe, and the African and Asian parts of the Church is growing. Since the bishop of Rome is supposed to lead all of them, there is a strong representative argument for a non-European pope. Furthermore, this would also give the Roman Catholic Church a stronger anti-colonial and antiracist perspective from above, something that it could need in breaking up with its dark colonial history.

It would probably also lead to an increased emphasis on social justice, poverty reduction and the like. While both John Paul II and Benedict XVI had a heart för peace and justice, cardinal Peter Turkson has as a Ghanaian probably an even stronger experience of the need of activism in the world (in fact, he is the president of the pontifical council for justice and peace). There is even a possibility that a pope from the global south would be more used to the gifts if the Spirit. Again, both John Paul and Benedict welcomed and blessed the Catholic charismatic renewal – the largest charismatic movement in the world – but generally there’s more revival fires in Africa and Latin America.

No matter who becomes pope, God bless him. What’s really important is not his nationality but his calling, gifts and character. Still, I really hope that the Catholic Church will acknowledge its international scope even more and embrace the wisdom and passion among the believers in the two-thirds world, as well as among Christians in other denominations. I’m convinced that all would benefit from that.