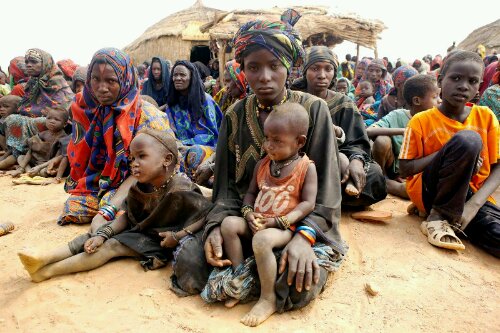 While Mozambique, DR Congo and South Sudan also are facing enormous humanitarian crises, Mali is perhaps the African country which has most problems right now. Islamists supported by al Qaida have taken control of the northern parts of the country to practice extreme sharia laws, and to stop northern Mali from becoming a terrorist state, France is cooperating with the Mali government in a military offensive. In the midst of violent conflict are millions of civilians that already were poor, hungry and sick before. The result is disastrous. UNHCR reports:

Since the start of the conflict in northern Mali a year ago, more than 150,000 refugees have fled to neighbouring Mauritania, Niger and Burkina Faso, while nearly 230,000 have sought safety in other areas inside Mali. […] Most are living in poor neighbourhoods with little or no access to housing or vital services such as clean water, education and health.

People fleeing the current fighting between French-backed government forces and rebels in the north of Mali tell alarming accounts of atrocities. A former resident of Gao, who left the northern town after recent air strikes, told UNHCR that food and fuel were in short supply.

“The situation in Gao is difficult. The rebels took all the medicines from Gao hospital. I saw dead bodies everywhere, in the yard of the hospital,” said Agesha, who fled the town last Sunday.

I strongly urge you to support Christian Aid’s West Africa Food Crisis Appeal, which will bring food and humanitarian relief to the people in Mali and surrounding areas. And I also urge you to pray for this country. There are few Christians in this country, and because of the rise of extreme Islamism, they are severely persecuted. Yet, the main thing Mali needs to get rid of war, poverty, terrorism and hunger, is a mighty Holy Spirit revival. They need a miracle, and they need it now.

Conscious about this urgent need, I was so encouraged when I found this testimony  concerning a miraculous healing which occured on a Christian clinic in Mali three years ago:

A couple months ago, Bafo Coulibaly was brought to the hospital by her brother-in-law, Pastor Enoch, one of our chaplains.

Her husband (Pastor Enoch’s older brother) wept when he was told that there was nothing we could do for her… she had an inoperable cervical mass. She and her husband had been very resistant to Enoch’s faith for many years. But after her consultation that day, Bafo listened as one of our nurses talked to her about Jesus.

Bafo went to stay at Pastor Enoch’s house with pain medicine we gave her to help relieve her discomfort. Dr. Dan Nesselroade told Enoch that only Jesus could heal Bafo; the only thing left to do was to pray.

So Pastor Enoch prayed, and he prayed for a miracle. God gave him two!

The Miracle of New Life
Two weeks later, after years of resistance to Jesus, Bafo prayed to accept Christ. A month after her initial consultation, she returned to the hospital. When Dr. Dan examined her, he found only a small lesion where the mass had been!

Bafo was smiling, saying that her pain and symptoms were gone. Dr. Dan discussed the possibility of doing a radical hysterectomy, but decided to wait two more weeks to see if God would complete the healing work He had already started.

Another Answered Prayer
When Bafo arrived the day of her scheduled surgery, her exam showed that she had been completely healed and was no longer in need of surgery.

I passed a smiling Bafo on my way to the hospital last week. I marvel regularly at God’s miracles and wonders as He provides for the needs of the hospital and as He works in the lives of the people around me.