Home » Evangelism & Missions » Let the Poor Rise Up and Walk!

Let the Poor Rise Up and Walk! 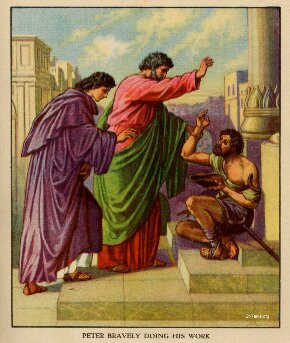 Acts 3 is one of my favourite Bible passages, since it presents a great example of how the gifts of the Spirit are tools both for evangelism and activism. When Peter and John went up to the temple to pray, they passed a lame man who was begging for money. Peter said to him: “Silver or gold I do not have, but what I do have I give you. In the name of Jesus Christ of Nazareth, walk.” (v. 6).

The man, who had been lame from birth, gets completely healed and starts jumping and dancing. People wonder what’s going on, Peter preaches the Gospel and explain that God did this miracle in order to give glory to His Son, and many of the listeners get saved. This single healing both rescued a man from the boundage of poverty and made it very easy for Peter to evangelize.

Heidi Baker, a charismatic missionary to Mozambique, shares a modern example of a similar event in her book Always Enough (pp. 167-9). A woman asked her to pray for her husband, named Carlos, who had been lame in his legs for two years. Heidi came home to their mud hut where the man was sitting on a reed mat with a pair of scissors in his hand, cutting up little pieces of paper. He sold this to the local matress vendors, earning just a couple of cents a day.

While Heidi looked at this desperate poverty, she prayed “Jesus, what am I going to do for him?” She felt that the Lord answered “Baptize him.” She asked the man if she could do so, and he answered “Yes, I would love to be baptized.” She took a cup of water and baptized him in the name of the Father, the Son and the Holy Spirit.

Then she put her hands on his head and said: “In the name of Jesus, get up. Get up, Carlos, and walk. In the name of Jesus I break the evil curse over you and your family. I break your paralysis, and I pray for Jesus to come, for the Holy Spirit to come and cause you to walk, in Jesus’ name.” She took his hand and said “Now, stand up and walk.”

Then Carlos stood up and walked. His family started singing and rejoicing. People started gathering around as they saw Carlos walking for the first time in two years. Heidi ends the story saying:

By Micael Grenholm in Evangelism & Missions, Justice & Economics, Signs & Wonders on January 12, 2013.
← Save the Lives of Syrian Victims of War! Stunning Prophetic Evangelism in Sweden →