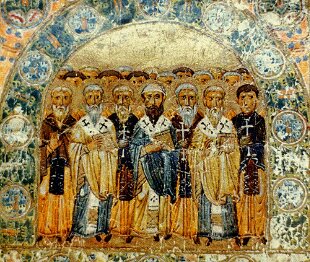 “Share everything with your brother. Do not say, ‘It is private property.’ If you share what is everlasting, you should be that much more willing to share things which do not last.” – The Didache, c. 90 AD, (Did. 4:8)

“Now then hear me and be at peace among yourselves, have regard one to another, and assist one another, and do not partake of what God has created alone in abundance, but share it with those that are in need. For some men through their much eating bring weakness on the flesh, and injure their flesh: whereas the flesh of those who have nothing to eat are injured by not having sufficient nourishment, and their body is ruined. This absence of community therefore is hurtful to you that have and do not share with them that are in want. Think of the judgment that will come! You then, that have more than enough, seek out them that are hungry!” … “Take heed therefore; as dwelling in a strange land prepare nothing more for yourself but a competency which is absolutely sufficient and necessary.” – The Shepherd of Hermas, c. 110 AD, (Herm. Vis. 3:9:2-5 and Herm. Sim. 1:6)

“They [Christians] love one another. They do not overlook the widow, and they save the orphan. He who has, ministers ungrudgingly to him who does not have. When they see strangers, they take him under their own roof and rejoice over him as a true brother, for they do not call themselves brothers according to the flesh but according to the soul.” – Aristides, early 2nd century (Apology 15)

“We who once took most pleasure in the means of increasing our wealth and property now bring what we have into a common fund and share with everyone in need.” – Justin Martyr, 100-165 AD (1st Apology 14)

“And instead of the tithes which the law commanded, the Lord said to divide everything we have with the poor. And he said to love not only our neighbors but also our enemies, and to be givers and sharers not only with the good but also to be liberal givers toward those who take away our possessions.” –Irenaeus, 130-200 AD (Against Heresies, Book IV, Chapter XIII, paragraph 3)

“Private property is the fruit of iniquity. I know that God has given us the use of goods, but only as far as is necessary; and he has determined that the use shall be common. The use of all things that are found in this world ought to be common to all men. Only the most manifest iniquity makes one say to another, ‘This belongs to me, that to you.’ Hence the origin of contention among men.” – Clement of Alexandria, 150-215 AD (Paedagogus, 2)

“Let us abandon luxuries, and we shall not regret them. […] Let us cast away earthly ornaments if we desire heavenly.” (On the Apparel of Women, Book 1, Chapter 13).
“We who share one mind and soul obviously have no misgivings about community of goods.” – Tertullian, 160-225 AD (Apology, 39)

“What deceived many was a blind attachment to their patrimony, and if they were not free and ready to take themselves away, it was because their property held them in chains . . . chains which shackled their courage and choked their faith and hampered their judgment and throttled their souls… And our Lord, the teacher of the good, looking to the future warning us against this, saying: ‘If you want to be perfect, go, sell your possessions and give to the poor, and you will have treasure in heaven. Then come, follow me.’ If the rich would do this, riches would not be their ruin; if they stored up their treasure in heaven, they would not have an enemy and a thief within their own household; their heart and thought and care would be in heaven, if their treasure lay in heaven: no man could be overcome by the world if he had nothing in the world to overcome him. He would follow our Lord untrammeled and free as the apostles and many others did at that time, and some have often done since, leaving their parents and possessions behind to bind themselves inseparably to Christ. But how can those who are tethered to their inheritance be following Christ?And can those who are weighed down by earthly desires be seeking heaven and aspiring to the heights above? They think of themselves as owners, whereas it is they rather who are owned: enslaved as they are to their own property, they are not the masters of their money but its slaves. The apostle was pointing to our times and to these very men he said: ‘Those who want to be rich fall into temptation and a trap and into many foolish and harmful desires that plunge men into ruin and destruction. For the love of money is a root of all kinds of evil. Some people, eager for money, have wandered from the faith and pierced themselves with many griefs.’ On the other hand, what rewards does not our Lord hold out as He invites us to scorn the property we have! For the small, insignificant losses of this world, what rich compensation He makes!” – Cyprian, 200-258 AD, (The Lapsed 11-12)

“It is absurd and disgraceful for one to live magnificently and luxuriously when so many are hungry…If one who takes the clothing off another is a thief, why give any other name to one who can clothe the naked and refuses to do so?The bread that you store up belongs to the hungry; the cloak that lies in your chest belongs to the naked; the gold that you have hidden in the ground belongs to the poor.” … “How can I make you realize the misery of the poor? How can I make you understand that your wealth comes from their weeping?” – Basil the Great, 320-379 AD

“All things belong to God, who is our Father and Father of all things. We are all the same family: all of us are brothers and sisters. And among brethren it is best and most equal that all inherit equal portions.” – Gregory of Nyssa, 330-395 AD

“Nature has poured forth all things for the common use of all people. And God has ordained that all things should be produced that there might be food in common for all, and that the earth should be the common possession of all. Nature created common rights, but usurpation has transformed them into private rights…God gave the same earth to be cultivated by all.” –Ambrose, 340-397 AD

“The rich are in possession of the goods of the poor, even if they have acquired them honestly or inherited them legally.”
“Not to enable the poor to share in our goods is to steal from them and deprive them of life. The goods we possess are not ours but theirs.”
“When you are weary of praying and do not receive, consider how often you have heard a poor man calling, and have not listened to him.”
“The dispersion of property is the cause of greater expenditure and so of poverty. Consider a household with husband and wife and ten children. She does weaving and he goes to the market to make a living; will they need more if they live in a single house or when they live separately? Clearly, when they live separately. If the ten sons each go his own way, they need ten houses, ten tables, ten servants and everything else in proportion… Dispersion regularly leads to waste, bringing together leads to economy.” – John Chrysostom, 347-407 AD

“Seek as much as God has given you, and from that take as much as is necessary; the superfluities of the rich are the necessaries of the poor. Those who possess superfluities, possess the goods of others…Justice being taken away, then, what are kingdoms but great robberies. For what are robberies themselves, but little kingdoms.” –Augustine, 354-430 AD

“Give away these earthly things, and win that which is in heaven. Give that which you must leave, even against your will, that you may not lose things later. Lend your wealth to God, that you may be really rich. Concerning the way in which to lend it, Jesus next teaches us saying: ‘Sell your possessions, and give alms, provide yourselves with purses that do not grow old, with a treasure in the heavens that does not fail’ … Worldly wealth has many foes … but no one can do damage to the wealth that is laid up above in heaven.” – Cyril of Alexandria, 378-444 AD, (Commentary on Luke, Homily 91)

By Micael Grenholm in God vs Wealth, Justice & Economics on January 7, 2013.
← Hotel Bar Revival in Redding, California Save the Lives of Syrian Victims of War! →