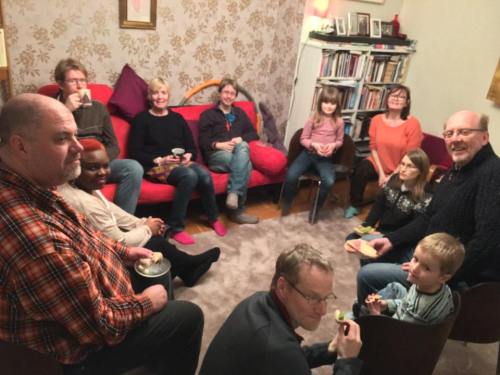 Photo from tonight’s cell group in my church, which is basically identical to our Sunday service

In Biblical times, local churches met primarily in homes as a complement to their public evangelism (Acts 2:46, 20:20, Rom 16:5). For at least 250 years home churches were the norm – the earliest discovered church building that wasn’t used as a home is from the late third century. With Constantine stuff changed, basilicas and cathedrals were established, and these were the norm in the state churches.

Radical restorationist groups have often started in the homes, this includes the early Anabaptists, Baptists and the Pietist movement. When less persecuted and more established, they have often built church buildings as their state church counterparts. In the 18th century, Methodist leader John Wesley introduced the concept of having meetings in homes as a complement to the Sunday service in a church building.

In the 20th century this practice has become very popular. Realizing that meetings in church buildings aren’t designed to effectively promote fellowship and discipleship, many church leaders have welcomed cell groups/small groups/house groups in their congregations.

However, there are no fixed standards to what a cell group is and what it should do. Since it’s not viewed as a church of its own, there are usually no requirements of it to include the things that we see that New Testament churches were expected to include. For this reason, there’s basically anarchy when it comes to how cell groups look like. Here are some examples:

All of these are real cell groups that I’ve encountered or heard about here in Sweden, and I’m sure there are many more variants. To be honest, I think there often is wasted potential here. I was chatting with some church leaders the other day on Twitter, they were complaining about how young Christians rarely read the Bible. I pointed out that cell groups could be a key to increase Bible reading, whereby on of the pastors responded “We’ve tried that, it didn’t work”. To my ears, that sounds like “We’ve tried church, it didn’t work”.

By Micael Grenholm in Church & Theology on February 24, 2016.
← Candy Gunther Brown on Miracles and Democracy Why All Churches Should Look Like New Testament Churches →