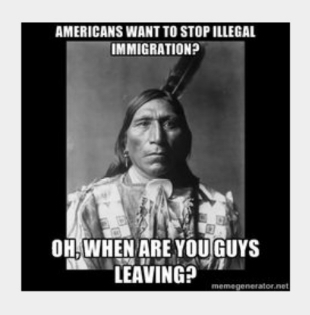 I’ve understood that people currently talk a lot about migration in the United States; Donald Trump has brought up the issue in his presidential campaign and I have seen many Americans on social media and in the commentary section of this blog. They often express severe xenophobia, particularly towards Latin American migrants from Mexico whom they emphasize are “illegal aliens.” My very conservative friend Rick Lamascus who is a very faithful reader of this blog even though he disagrees with most of what I write, has argued:

“Controlled Immigration is not a problem. What is a problem is illegal aliens pouring across the US border. It is like poison to our schools, hospitals, and jobs.”

“We have at least 30 million illegal aliens. Our schools systems are flooded and the hospital emergency rooms are flooded with illegals who pay NOTHING. Our sorry politicians are such prostitutes. They constantly pass legislation to give the illegals more and more.”

As you can see, to him “illegal” is not just something you do, it is something you are. Instead of talking about “people” or “neighbors” (which Mexicans obviously are to US Americans), Rick talks about “illegals” – as if it was a job or ethnicity.

Benjamin Corey has written a very good article on why Christians should stop talking about “illegal immigrants.” His reasons are:

Check out his blog post for his explanations to each point.  I would add some other reasons: the Bible never talks about illegal immigrants. Got questions has argued that the Biblical commands to welcome aliens, treat them as natives and love them as oneself (Lev 19:33-34) should be nullified when it comes to illegal immigrants – then we’ll obey Romans 13 instead and support deportation – but Lev 19:33-34 has no exceptions. If Romans 13 means that we can ignore God’s command when a worldly authority says something that contradicts it, then I guess God wants Christians in North Korea to become atheists and that he wanted Christians in Germany in Poland to kill all the Jews.

See, the fact that something is illegal doesn’t mean that it is immoral. That’s the point of my song God is a Criminal. God send an angel to free Peter from prison in Acts 12, that was illegal. But it was right. Many poor people who enter rich countries illegally do so to get a better life for themselves and their children. Bob Ekblad has many such testimonies of poor, marginalized undocumented migrants who struggle to get a brighter future.

In Europe, all European immigrants are legal but all from Syria, Afghanistan, Somalia etc have to enter illegally – because there is no way to enter legally. That’s why there are reports about people drowning in the Mediterranean, it’s when migrants try to enter the lands of the rich. European policy is to not grant visas for refugees, so they can’t fly. Many who have entered Europe illegally get asylum and thus gets a legal permit to stay after some time, just as many Americans want to grant undocumented residents citizenship after they’ve been there for a while.

The fact that something is illegal expresses nothing else that the government currently don’t want you to do it. This doesn’t mean that it is immoral or wrong however; as Martin Luther King said: Never forget that everything Hitler did was legal. MLK himself did illegal stuff though, which helped him abolish American apartheid. In God’s eyes, we’re all sinners, but the Scripture never calls anyone “illegal”. Actions can be illegal, not people.

By Micael Grenholm in Peace & Politics on August 26, 2015.
← Countering 7 Arguments Against Community of Goods Imams Receive Jesus in West Africa! →