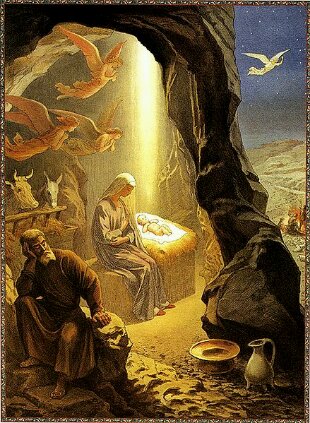 So it is Christmas, and once again we have celebrated the incarnation of Jesus Christ through destroying the climate even further with our hyper-consumption and meat eating, at least in the Western world. In the midst of shopping, Santas and stress, Christians try to remind their Facebook friends that it is Jesus who is the reason for the season. I’m convinced though that to make this message really effective, we have to split from the traditional consumerist Christmas celebration and point to the fact that the original Christmas was a revolutionary event that turned the existing political and economic structures up side down.

God Almighty became a baby. He was not born in the Holiest of Holies to the tones of choirs and harps, but among cows and hay and was laid in a food pot. Herod, the political ruler, got totally mad when he heard that the true King of Israel had been born, and so God was forced to become a political refugee. From this vulnerable and poor situation Jesus was then about to criticise the rich and privileged in His radical preaching, which His mother had prophesied about when He was laying in her womb:

He has brought down rulers from their thrones
but has lifted up the humble. He has filled the hungry with good things
but has sent the rich away empty. (Lk 1:52-53)

Thus, the Christmas story is truly revolutionary (in a non-violent way, of course). But it is also Charismatic! It focuses on the miraculous virgin birth and contains numerous angelic visitations, prophetic dreams and visions. These often contain words of knowledge about things that one could not know in the natural, like when the shepherds were told that the Messiah lied in a manger (Lk 2:12) or when Joseph was told that Herod had died (Mt 2:20). Furthermore, the whole arrival of the Messiah had been foreseen by prophets several centuries before.

Both the miracles and the revolutionary societal change are of course centering around Jesus. It is Him we celebrate as the Saviour and King of the world. His arrival to earth made the salvation from death and sin possible so that man could be reconciled with God. This is why both the usage of spiritual gifts and activism for peace and justice have to culminate in bold evangelism. That’s what Christmas is teaching us. Have a blessed holiday!