It’s not controversial to say that we should give money to the poor. The question is how much we should give. Some Christians are arguing that we should give tithe, one tenth of our income. But we can’t limit our giving to that, keeping nine tenths of our income no matter if we need it or not. The Old Testament tithe was not a maximum amount but a minimum. Deutoronomy describes how we should act towards the poor even after we’ve given tithe: if we are able to help them but are not doint it, they may call to the Lord, and we will be guilty of sin. 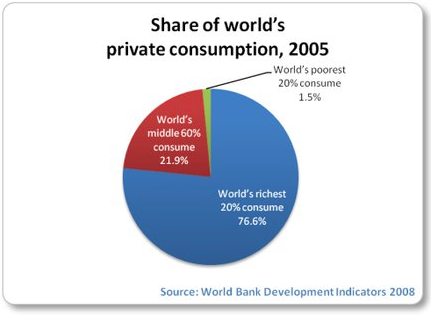 If the rich only give tithe, they are still rich, and the poor are still poor. We need equality. The richest 20% of th world’s population consume 80% of the world’s resources. The poorest 20% consume 2% of the resources. The latter group suffer of hunger, lack of clean water and diseases, and they don’t live very long. At the same time, the rich spend billions on entertainment, luxury and other unnecessary stuff. This is totally unjust and needs to be changed.

There are two ways to establish global equality in order to solve this problem. The first one is to create economic growth for the poor until they are as rich as the rich are today. This, however, is impossible because of the environment. If everyone lived as an avarage American, we would need five earth globes. The second solution is that the rich get poorer and distribute a lot of their money to the poor. This is what the Bible talks about.

In Luke 3:11, John the Baptist says that the fruit of repentence is that the one who has two tunics gives one to the poor. In 2 Cor 8:13-15 Paul states that the goal of giving money to the poor is equality. He refers to Exodus 16 where we read that the manna through God’s supernatural intervention was equally distributed to the Israelites. And last but not least, the first church, which all other churches come from and whose leadership was the apostles, practiced economic equality (Acts 4:32-35). There were no needy person among them, since there were no rich either.

By Micael Grenholm in God vs Wealth, Justice & Economics on December 14, 2012.
← Pastor Pratap vs the Demons Stop the Guns, Heal the Victims, Forgive Adam Lanza →