Did Trump Just Call Himself Divine?

This sentence from The Guardian has to go down in history as completely unimaginable concerning a U.S. president just a few years ago:

Over an ensuing half-hour rant, Trump trucked in antisemitic tropes, insulted the Danish prime minister, insisted he wasn’t racist, bragged about the performance of his former Apprentice reality show, denied starting a trade war with China, praised Vladimir Putin and told reporters that he, Trump, was the “Chosen One” – all within hours of referring to himself as the “King of Israel” and tweeting in all caps: “WHERE IS THE FEDERAL RESERVE?”

What really concerns me is the “Chosen One” and “King of Israel” part. The Guardian even leaves out something even more disturbing, namely that Trump welcomed the comparison between him and the second coming of God: 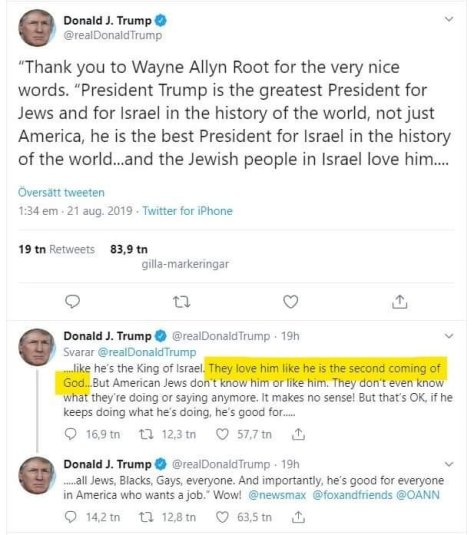 A lot has already been written on Trump’s apparent pathological narcissism, and the tweets above provide additional evidence that his view of himself is severely disturbed. Any sane person, regardless of their own religious beliefs, would reject any comparison between themselves and the Creator of the universe. 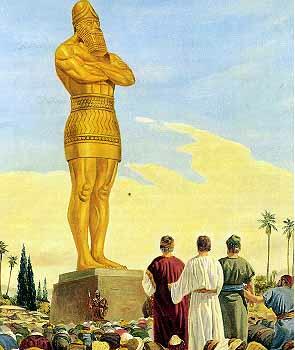 The only people I can think of who actually view themselves as being on a divine level are authoritarian dictators of modern communist countries as well as ancient empires in Biblical times. We read in Daniel 6 how the administrators of Babylonian King Darius suggested to him that he signs a decree stating that “anyone who prays to any god or human being during the next thirty days, except to you, Your Majesty, shall be thrown into the lions’ den”. Rather than saying “That’s outrageous! Do you think I have some kind of god-complex?”, Darius finds it to be a reasonable idea and signs it. As a consequence, the prophet Daniel is later thrown into said lions’ den.

Even in New Testament times, we read in the book of Acts: ”On the appointed day Herod, wearing his royal robes, sat on his throne and delivered a public address to the people. They shouted, ‘This is the voice of a god, not of a man.’ Immediately, because Herod did not give praise to God, an angel of the Lord struck him down, and he was eaten by worms and died.” (Acts‬ ‭12:21-23‬ ‭).

This is obviously not something that happens to everyone who perceive themselves as divine, as we would have got rid of a lot of dictators if that had been the case, but it clearly expresses how serious the sin of pride is. The original sin in the garden was that Adam and Eve appreciated the temptation of Satan, saying that they would “be like God” if they ate the forbidden fruit (Gen 3:5).

I turn now to my Pentecostal and charismatic brothers and sisters who have welcomed and praised Trump, even saying that resisting him is resisting the will of God, and I ask you: where is your condemnation of blasphemy? Surely, that is a sin according to us all? I’m well aware that our views on peace and justice differ, as well as our interpretation of how well the president is promoting such things.

But even if one agrees with Trump’s policies, surely him announcing himself as the chosen one and welcoming the description “like the second coming of God” should be viewed as utterly blasphemous? How could it be anything else?

Are All Christians Demon-Possessed Until Proven Innocent?

September 19, 2016 7:15 pm / 8 Comments on Are All Christians Demon-Possessed Until Proven Innocent?

My friend Mikael Skogsén is a pastor with a strong prophetic gift who regularly updates his Facebook with testimonies about words of knowledge, healings and salvations that happen in his everyday life. I got his permission to share one of the testimonies, which I did yesterday on my Swedish blog. It’s an amazing story about how he and his friend were eating on a restaurant, when suddenly Mikael starts prophesying about the waiter’s fiancee in Germany and proclaimed healing in his aching back. The man was of course eventually saved.

Now, some people started to suspect and accuse Mikael of using the power of psychic spirits, similar to occultists in Asia, which would produce apparent healings that eventually result in depression and even worse ailments. Now, I’ve grown accustomed to heresy hunters, people who spend too much time on the Internet arguing that millions of charismatic Christians are possessed by Kundalini spirits and that influential Pentecostal leaders like Bill Johnson are false prophets. I’ve argued against their bad arguments time and again. That’s not new. What really bothers me is that it seems that many of these people automatically assume that if a Christian experiences supernatural stuff, it must be demons.

See, when heresy hunters attack Bill Johnson or Todd Bentley they at least have a lot of resources online to base their judgment on (even if they all-too-often aren’t doing much research). These are famous pastors whose theology and practice have been publicly debated. But Mikael Skogsén isn’t famous. The people who commented on my post hadn’t even heard of him before. And yet, the knee-jerk reaction is that his supernatural ministry is demonic. END_OF_DOCUMENT_TOKEN_TO_BE_REPLACED

Where is Jason Westerfield?

It’s almost been one month since pastor Bill Johnson called evangelist Jason Westerfield out as a false prophet, but Jason has still not said anything about this publicly. Here, I talk about this and comments some of the comments I’ve received from my previous video and blog post about Bill and Jason. I hope and pray that Jason soon will announce that he does not believe in new age and that he confesses Jesus Christ as divine Son of God.

Bill Johnson, Randy Clark and Heidi Baker aren’t false prophets, as some wrongfully claim, but who then are true false prophets? About a month ago I argued in a Youtube video that several charismatic leaders are falsely accused if being false prophets by primarily Christian internet warriors; many of them are even accused of being driven by false, demonic spirit.

A popular theory is that Kundalini spirits from India have infected large parts if the Christian, charismatic movement, but as I showed one month ago this Kundalini myth has neither biblical nor empirical support, and so saying that influential charismatic leaders are Hindus in disguise is quite similar to the claim that the pope and US president are alien lizards in disguise.

I received some feedback on my Kundalini Myth video that I want to address today. My friend Robert Martin wondered if it isn’t so that “weird manifestations” may be the result of demonic activity, even if the person has not any connection to a Kundalini sect. He mentions dog barking and laughter.

END_OF_DOCUMENT_TOKEN_TO_BE_REPLACED

My most well-read post on this blog ever is the Kundalini Myth, where I criticize Pentecostal kiwi Andrew Strom who argues that large parts of the charismatic movement is demonic, influenced by a false spirit from the Hindu Kundalini sect in India. I’ve now made a video where I develop this critique and talk about the difference between – and sorry if this sounds meta – true false prophets and false false prophets.

Strom’s only evidence to connect Bethel Church to Kundalini is basically YouTube videos; he has observed how people behave at the Kundalini meetings, found similarities with charismatic meetings and thus concludes that it is the same, demonic spirit behind it all. I critizise him for calling behaviour like shaking, laughing, crying etc “manifestations” even though the Bible never does so, and argues that a more suitable name would be reactions. These things are not necessarily produced by a spirit (whether Holy or false), but it could be a human reaction to it (or simply somthing people do without any spirits involved).

Strom’s biggest problem is that the Bible never says that these reactions is something we should pay attention to when discerning the spirits. These are some of the most important New Testament texts when it comes to false prophets and spirits: END_OF_DOCUMENT_TOKEN_TO_BE_REPLACED

Andrew Strom is a Christian who believes that large parts of the global charismatic movement is demonic. In his video Kundalini Warning, as well as in the book with the same name, he claims that false spirits have invaded ministries like Catch the Fire (the “Toronto Blessing” church), IHOP, Bethel Church, Morningstar, and more. These false spirits originate in the Hindu kundalini cult in India, Strom argues.

Now, you expect some strong evidence to support these radical claims, don’t you? Perhaps Strom have discovered some documents proving that before the Toronto Blessing began, pastors John and Carol Arnott went to India to receive kundalini teaching from a guru. Or perhaps Strom have made an interview with Bethel Church’s pastor Bill Johnson and found out that his greatest inspiration is Lama Rama Ding Ding from Uttar Pradesh?

Nope. On the contrary, none of these ministries have ever preached kundalini teaching, nor have they had any association with Hindu groups whatsoever.