Home » Signs & Wonders » Can God say something prophetically that the Bible already says?

Can God say something prophetically that the Bible already says? 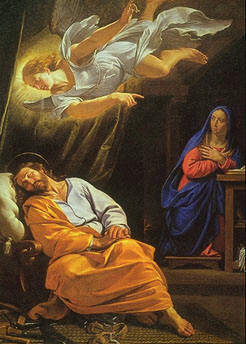 The Angel gives an “unnecessary” message to Joseph

The strange Strange Fire conference has put me into debate with some cessationists, especially when making this video. One common cessationist argument is that if the gift of prophecy still exists, the Bible isn’t our only source for doctrine about God, and thus the door to heresy stands wide open. Tom Pennington also uses this argument in his (bad) case for cessationism.

What I try to explain then is that firstly, prophecy has multiple purposes. 1 Samuel 9 contains a fascinating story about how Saul is looking for his father’s donkeys, and walks to prophet Samuel to see if he can use his prophetic gift to find out where they are. Before he even says something, Samuel invites him to dinner and adds “As for the donkeys you lost three days ago, do not worry about them; they have been found.” Then he reveals that the Lord has showed him that Saul is the new king of Israel, and anoints him.

Now, neither the revelation about the donkeys nor that Saul was to be king was doctrinal revelation; rather, they revealed a practical circumstance and God’s plan for an individual. These prophetic aspects should of course always be tested (1 Th 5:19-22), but there is not much need to worry about false doctrines here.

Excellent question! Jack Deere writes about this in his book Surprised by the Voice of God (pp. 217ff.) – a book I highly recommend. He describes how he used to believe that God never would use dreams and visions to communicate something that already was communicated in the Bible. “Why would he use an ‘inferior’ means to communicate when he had the Bible at hand?” However, Deere found out that this position actually contradicts Scripture:

One of the most famous dreams in the Scripture is the dream God gave Joseph when Joseph had made up his mind to divorce Mary because he thought she was carrying another man’s baby. An angel of the lord appeared to Joseph in the dream and told him that Mary’s child was not the result of an immoral act with another man. The child had been conceived by the Holy Spirit.  […] The startling thing for me was that it was unnecessary. God did not have to use this dream to communicate the truth to Joseph about the virgin conception of Jesus. God could have simply brought Isaiah 7:14 to Joseph’s mind: “The virigin will be with child and will give birth to a son, and will call him Emmanuel.”

[…] We find the same phenomenon happening in the book of Acts. When Paul went to Corinth, he was apparently worried that he would be attacked there and possibly even killed. God came to him in a vision of the night and promised him that no one would harm him and that he had many people in the city of Corinth (Acts 18:9-11). Now, why did God give Paul a vision to communicate this? There were many perfectly good Old Testament texts he could have brought to Paul’s mind in order to communicate the same truth. For example, he could have led Paul to Isaiah 54:17: “No weapon forged against you will prevail, and you will refute that accuses you.” The completed Old Testament rendered this vision unnecessary, yet God still chose to give the vision.

Apparently God didn’t share my view of dreams and visions.

To illustrate this, let me share a testimony of a friend of mine here in Sweden. He used to be a Muslim but became a Christian after Jesus appeared to him in a dream and said “I am Jesus, I am your God”. Although never having read the Bible, my friend saw that Jesus’ hands had holes in them. Jesus showed him a woman in the dream and told him that she would explain who Jesus is. Later, my friend found the woman just as she had looked like in the dream, and it turned out that she was a Lutheran priests in his community.

Now, that Jesus is God and that His hands have holes are clearly something you can read in the Bible (Jn 1:1, 20:27). Yet, the Lord chose to reveal that in a dream to my friend (probably because he obviously didn’t read the Bible). Furthermore, the dream also revealed practical information about a priest which my friend could not have received from the Scriptures, information that helped him to become a Christian. This is why prophecy still is needed today.

By Micael Grenholm in Signs & Wonders on November 30, 2013.
← Pope Francis, Capitalism and the Gifts of the Holy Spirit Can God say something prophetically that the Bible DOESN’T say? →