No, We Don’t Need to Adapt Church to Young People

Usually when churches choose to stop doing Biblical things they don’t want to admit that the reason behind it is laziness, apostasy or sin. Rather, they like to blame the Biblical thing itself for not being “effective” enough, or they might claim that it’s just a calling for some to do on their own, or that say that culture has changed and that modern or young people aren’t interested in these particular Biblical things, so that’s why we shouldn’t do them.

I joked with these three excuses in my recent sketch about why churches don’t evangelise. In this post I would like to focus on the “modern/young people want something different” argument. It’s often used as an evangelistic argument: in order to win or keep people we need to change. Which is why it’s so absurd when it’s arguing against evangelism.

But whatever Biblical thing you argue against, it becomes nonsensical to use this argument. You need to either argue that churches shouldn’t follow the Bible, or that the Bible actually says something different from what it appears to say. What modern or young people think doesn’t matter at all. If doing Biblical things put them off, so be it. We must obey God rather than human beings (Acts 5:29), and the Bible is a better source to what God wants than Millennials. END_OF_DOCUMENT_TOKEN_TO_BE_REPLACED 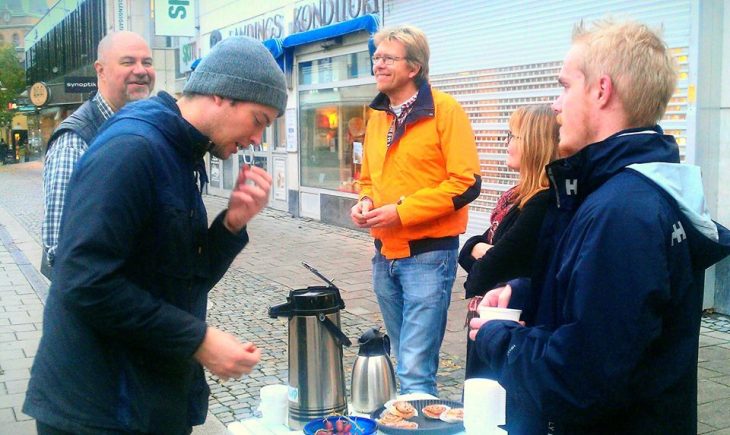 I love my church! Uppsala Mosaik is a small house church in Uppsala, Sweden (not to be confused with the mega church Mosaic in Los Angeles, California (we’re way smaller than them)) focusing on the Kingdom of God. We’re evangelical, charismatic and activist, and our aim is, like many other churches, to love God and love people.

When I visited Mosaik for the first time in 2010, I was amazed by its structure. We met in a pub back then. We had coffee break in the middle of the service, between worship and Jesus stories. Jesus stories, by the way, are when everyone can share a testimony about what Jesus has done in their life. And when the service was coming to an end, students flooded the pub while Mosaik volontueers started to serve free pancakes.

I sat down with the pastor, Hans Sundberg, and he explained the theology behind what Mosaik looked like. In Sweden, people are leaving churches like crazy, so that statistically, if the drop-off speed would remain at this rate, there would be no Christians here in 2040. Now, God is good and we pray for revival, but Hans was convinced that the church must leave the old Christendom-structures that builds large cathedrals expecting people to fill them, and becoming sad when they don’t.

END_OF_DOCUMENT_TOKEN_TO_BE_REPLACED

Why Don’t We Serve on Sunday Services?

In this clip, my favourite theologian John Wimber shares how he thought a church service looked like before he, as a newly converted believer, had ever visited one. He thought that people met at church, worshipped, had a good time and then decided who should go where: “You go downtown, I’ll take Anaheim”, etc. Then they would go out, heal some sick, cast out some demons and lead a few people to Christ, and then they would have lunch afterwards.

Unfortunately, John’s church wasn’t like that. After having attending a whole bunch of boring services he once asked his pastor “When are we gonna do the stuff?” “What stuff?” “You know, the stuff Jesus did – healing the sick, raising the dead” “Well, we don’t do that anymore. You just have to believe that it was done once.” John was confused and asked “What do we do then?” “What we did last morning!” John gasped: “For this I gave up drugs?”

I had similar thoughts when I was a new believer. I always thought it was strange that the church meetings were called “services”, since 95% of the people in my church weren’t serving very much. In fact, we hardly did anything except singing a few hymns and walking to the altar to receive communion.

When I later on joined a charismatic church the singing part got a bit more active, but beside that you didn’t do anything in church except receiving – receiving a sermon, receiving prayer or receiving a cute song from the Sunday school group.
END_OF_DOCUMENT_TOKEN_TO_BE_REPLACED