Tag Archives: Sermon on the Mount

The Simple Tip from Jesus that Transformed My Life

The age of the Internet is an age of huge potential and opportunities for mission, networking and activism, but it is also an endless sea of temptations and distractions right at our fingertips.

We often take the latter path, even when we don’t want to. I’m sure most of us clearly can relate to Paul’s words:

I myself have struggled with this for a long time. But as the title of this blog post suggests, a simple tip from Jesus Christ himself in his amazing Sermon on the Mount has been a game-changer for me.

Jesus gives this advice as he teaches on fighting sexual temptation. I took this to heart and now I look like this:

END_OF_DOCUMENT_TOKEN_TO_BE_REPLACED

The “Great Commission” is not so great. I mean, of course everything Jesus says is awesome, but we are making a huge error if we define missions only based on Matthew 28:18-20, basically because we are not given so much information about missions there. Jesus says: “make disciples of all nations, baptizing them in the name of the Father and of the Son and of the Holy Spirit, and teaching them to obey everything I have commanded you.”

Now, to understand what “everything I have commanded you” means, we obviously have to read the rest of the gospels! Missions is not only about baptizing people and telling them what to believe, it’s about raising up a non-violent army of passionate disciples that are willing to do the stuff Jesus commanded us to do.

If we stick to the Gospel of Matthew, Jesus starts teaching discipleship in the Sermon on the Mount (Mt 5-7). This is not a collection of random sayings of Jesus, it has a common theme: actions. Radical actions; love your enemies, give to the poor, do not store up treasures on earth, do not judge, do not look at someone with lust, etc. This is all part of the Great Commission – we are supposed to live like this, and those who we baptize are supposed to live like this. Thus, missions include peacemakting, social justice and holiness.

END_OF_DOCUMENT_TOKEN_TO_BE_REPLACED

In response to my blog post on how following the Sermont on the Mount is a key to revival, my friend Drew Gordon Meakin wrote:

Great article! I thought of some instances that back up your point.

In Acts 6:8-8:1 we see Stephen praying for his enemies while being stoned to death. Saul of Tarsus, the church’s greatest persecutor, was one of the people there that he was praying for. Saul later has a dramatic supernatural encounter and becomes the Apostle Paul. I fully believe Stephen’s selfless prayer while dying was a seed in Paul’s conversion.

The movie “End of the Spear” tells the true story of five missionaries reaching reaching out to the most violent tribe in Ecuador. All of them are killed, but they die loving their enemies, and this leads to a dramatic supernatural encounter which eventually leads to the whole tribe coming to Christ.

David Wilkerson’s loving words to the violent gang member, Nicky Cruz, who threatened his life, led to Nicky’s conversion which also was a precursor to the founding of the most successful “Spirit-filled” drug rehabilitation programs in the world and the largest church in New York.

Martin Luther King’s commitment to the peace teachings in the Sermon on the Mount, while advancing his cause, not only changed policies, but changed hearts and led to the greatest civil rights movement in history. END_OF_DOCUMENT_TOKEN_TO_BE_REPLACED

Revival on the Mount

The Sermon on the Mount (Mt 5-7) is a revival sermon. It wasn’t delievered in a cathedral to a bunch of silent church-goers, but in the midst of a powerful outpouring of the Holy Spirit where mighty miracles were occuring. Matthew describes how people came from far away in order to be blessed by the miraculous power that was flowing out from the hands of Jesus (4:23-25). I imagine the scenery as in the clip above, but even better. Every single one got healed: those suffering severe pain, the demon-possessed, those having seizures, and the paralyzed. Revival fires were blazing! 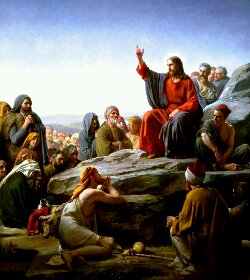 But when Jesus starts to preach, He doesn’t talk about “the anointing”, “open heavens”, “glory invasion” or some other Charismatic cliche. He talks about Kingdom lifestyle and holiness: doing good deeds, loving enemies, giving to the needy, fasting, praying, not storing treasures on earth, not judging people, doing to others what you would have them do to you, and so on. As I’ve written in a previous blog post, it is unfortunately unusal in many parts of the church today that faith healers speak about enemy love and denouncing wealth, or that Christian activists conduct healing crusades.

This is a shame, because I am convinced that not only does the Sermon on the Mount contain instructions for living an activist life that makes the world a better place, it is also a key for Charismatic breakthrough. Immediately after Jesus has delivered His sermon, He heals a guy with leprosy (8:1-4), then a paralyzed boy (vv. 5-13), and after that a whole group of sick and possessed people (vv. 14-17). Directly after stating that the Father will give us good gifts when we ask for it, He tells us to do to others as we would have them do to us (7:9-12). The gifts of the Spirit are given by grace, but that doesn’t mean that we shouldn’t strive for holiness. On the contrary, if we do not act according to the commands of Jesus, our spiritual house may fall “with a great crash” (7:24-27).
END_OF_DOCUMENT_TOKEN_TO_BE_REPLACED