Heidi Baker is known to be courageous, ambitious and a bit charisma-crazy. Together with the rest of the Iris Global leadership team they’ve decided to build a whole frickin’ university in Pemba, northern Mozambique. “The Lord said: ‘Build it the size of Standford'” Heidi excitingly says in a recently published video that I’ve included in the clip above. The university will be an amazing contribution to development in the whole region. To support the project, head to Iris Global’s Giving Center and/or include it in your prayers.

The story of Iris Ministries South Africa is to a large extent the story of Surprise Sithole, a man of God who has experienced many miracles. In the mid-90’s, shortly before he connected with Iris, he received a prophetic word from the Lord about moving to a white river. At first he didn’t understand what it meant, buy then he found out that there’s actually a place named White River in South Africa. So he and his wife Tryphina moved from Mozambique to SA.

God continued to speak to Surprise about ministering on “the mountain” – Backdoor, a township outside White River. Back then, Backdoor was known to be a very dangerous place, where the crime rate was very high and robbery was a part of daily life. The Sithole family moved there anyway, and they were severely tested – once they were almost killed by a violent gang. But as their church plant grew and their social ministry expanded, the community started to change. 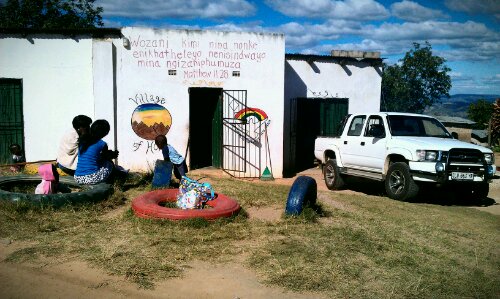 As I wrote in my previous blog post, there are still many problems in Backdoor, but the crime rate really has decreased a lot since Iris started working there. Of course, it’s hard to tell if that would have happened anyway, but surely Iris has contributed a lot to the good trend. Its community center, Village of Hope, includes a preschool, a bible school, a feeding programme, a sowing center, a youth ministry and soon also a carpentry. Everything they do is aiming to bring help and hope to the people.
END_OF_DOCUMENT_TOKEN_TO_BE_REPLACED